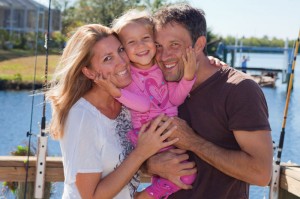 Randy & Sharon with their daughter Nora.
“My life revolves around my family, the beach and photography. So becoming a family beach photographer was a natural evolution. I really enjoy going out to our beautiful seashore and capturing images that evoke smiles from my clients. When it comes to my sessions, I want them to, not only walk away with beautiful, professional images, but have a great experience as well.”
— Randy Hamilton

Hamilton Images is owned and operated by the husband and wife team of Randy & Sharon Hamilton. With Randy being the photographer and Sharon handling the administrative end of the business. Portrait  photography is something Randy has been striving to excel at, however he also excels in commercial photography, such as products, food, and advertising. While they are based in Pensacola, Randy is available for travel along the entire Gulf Coast and beyond including Pensacola Beach, Destin, Perdido Key, Orange Beach, Rosemary Beach, Seaside and Navarre Beach.

Randy has a background in fine arts and brings that eye for composition and different perspective to his images. He strives to create something artistic and an image that captures the spirit of his subjects.

In addition to fine art, Randy is a graphic designer by career, so it is not by mistake that his commercial images fit seamlessly into design projects making him an ideal photographer for business advertising. It is instinct for him to think about areas where text can go and creating an image that moves the eye around the composition.

Finally, and maybe foremost, Randy is a storyteller. And what a better way to tell a story than visually. Like the old adage says, “a picture is worth a thousand words”. He tries to capture the essence of what needs to be portrayed. He strives to elicit a subject’s personality to shine through when he captures a portrait. If you want to see his storytelling brought to life, be sure to visit his award-winning photography project,  The One Shoe Diaries ››

Randy was born and raised in Cincinnati. He has lived in West Virginia, Kentucky and Hawaii before settling down in Pensacola for 8 years until Hurricane Ivan in which he lost his home. Randy and his wife Sharon then toured the U.S. in their motorhome with their two dogs for 4 years before once again settling back in Pensacola. They are now blessed with a vibrant little girl, Nora, which makes life worth living.

After attending the Columbus College of Art and Design for 4 years, Randy graduated some years later from UWF with a degree in arts and went on to do be an award-winning graphic designer eventually incorporating photography into his career. Randy’s designs are clean and efficient with an emphasis on functionality. This transcends over to his commercial photography which helps create images well suited for advertising and marketing purposes since he can envision the final purpose for the images. Randy has also started to get back to his fine art roots by delving into oil painting and charcoal drawing once again. Photography also become an additional artistic outlet, currently Randy and his wife are involved in the One Shoe Diaries photo exhibition project. A concept they have developed to help gain exposure for Randy’s photography and to get their eclectic stories from the road published.

Randy’s images have been published in numerous publications. His image of his daughter, Nora, playing in the surf at Pensacola Beach is currently used as the cover image for the 2012 Visit Pensacola Visitor Guide. He is also the primary photography employed by Snowbirds Magazine. His images have also been published by Southern Living, Coastal Lifestyles, CNN, Pilot Getaways, The Beaches to Woodlands Guide, Pensacola News Journal, The Pelican and others. His commercial photography list is extensive, and is nationwide. Over the past few years he has started to gain more notoriety as a portrait photographer around the Pensacola and surrounding Gulf Coast areas, and has been focusing more and more on his portraiture.